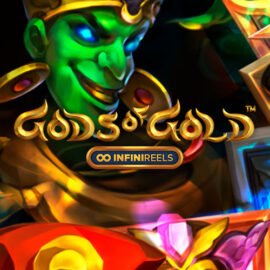 Gods of Gold INFINIREELS™ takes you deep beneath the ancient Kingdom of Mesopotamia, inside the tomb of the Ancient Pharaoh.

Gods of Gold INFINIREELS is a gambling solution that many online casino fans are sure to love, especially the ones who have already treated a large number of games. This slot machine will bring you to the ancient pharaoh’s tomb where you will fight a Genie and take your reward. An important thing is that the Gods of Gold INFINIREELS video slot is full of numerous various functions and bonus rounds. The slot developer is the NetEnt Company that released it in 2020. Let’s get into details in the review.

The Gods of Gold slot machine will be chosen by players who love winning not only much but also very often, of course. The slot is Mid/High volatile, which means that you won’t stay indifferent and even will be able to love it. The most pleasant bonus that the Gods of Gold INFINIREELS slot machine gives you as a reward is a maximal multiplier of the stake, which is 25,000x. Mind the bet amount, as your win can be much bigger if you choose the optimal one for you. The maximal permitted bet is as high as € 700, and the minimal one is only € 0.20.

This video slot is an excellent choice both for high-rollers and casual casino fans like you and me. Since, gambling needs a smart approach and correct stake. Important! Gods of Gold INFINIREELS, as the developers announce, has RTP 96.21%, which is pretty good. This way, the slot unlocks its full potential and makes playing on it much more pleasant.

If you play on the NetEnt slot machines for the first time, you can open the slot’s active menu, where you will find a detailed description of all functions as well as the payout for all possible landed symbols. The active menu will change its characteristics according to your bet amount, that is, with changing your bet, the payout amount for the symbols also will change by default.

To trigger a bonus game in the Gods of Gold INFINIREELS slot, a player needs to gather a combination of three Scatter symbols on the reels in the playing area. Then, a player will get ten free spins. In the game, every successful landed combination is awarded the expansion of the playing area with three playing cells, thus increasing your chances to get a big win. Also, the Wild symbol will help to gather a more successful combination. It can substitute a missing symbol or, even better, to gather a stronger line of high paying symbols.

All in all, the Gods of Gold INFINIREELS slot machine has eight symbols for which a player gets the payout, and four of them are very high paying. Namely:

Then, the symbols of the low paying category go, where the payout for the landed ones will be no less than 0.05x, and a maximal payout can reach no more than 9.6x. Don’t be scared with the relatively small payout for the given symbols because, due to the active functions of the slot, even the cheapest symbols will be able to gather a good combination with a very big win.

In overall, there are five functions in the Gods of Gold INFINIREELS slot machine, three of them are optional ones. The main and the most useful function is Infinite reels, where every winning combination increases the playing area exactly for three cells with that allowing to gather the best combination and increase the payout. The second but equally important function is Re-spin, where a repeated spin is activated in case of the unsuccessful landing of symbols.

The Gods of Gold INFINIREELS slot certainly deserves the attention of the players who enjoy the gripping atmosphere of mysterious adventures. Great animation, fascinating sounds, and large payouts are the things that the Gods of Gold INFINIREELS game gives you by immersing in the ancient pharaoh’s tomb. Keep in mind that the slot machine is very good adapted to mobile devices. Sure enough, this will help you at full measure enjoy it at the best online mobile casinos we have selected for your benefit. The Casinoid.in team recommends trying this novelty free by pressing the «Play for Free» green button!