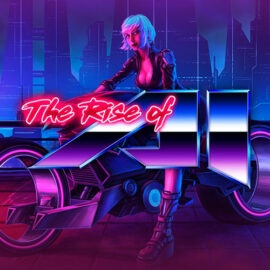 The Rise of AI

Casinoid.in » The Rise of AI

Imagine a world where robots rule over humanity. In Endorphina’s new cyberpunk slot release The Rise of AI, players get a taste of what life might be like in the future if the machines rise to power.

The Rise of AI is a game that plunges us into the futuristic world of 2050 that has just suffered through a terrible pandemic and is now under the control of artificial intelligence. The slot machine has five reels and ten paying lines in its arsenal. Also, a noteworthy detail is that the video slot has its unique functions and multipliers, as well as a big range of winning situations. The online slot is released by the Endorphina Company in 2020 and became a great gift for the players who prefer cyber adventures. Get the details of the Rise of AI online machine in the review.

The Rise of AI Slot Guide

The Rise of AI Slot Machine, according to developers, is of mid/high volatility. It goes without saying that this status is a perfect choice for everyone playing in online casinos for real money and with low stakes. Important! Though it is a medium volatile game, our experience says that The Rise of AI is better for the players using the “High-Roll” mode since, in most cases, the winning combinations don’t produce significant results in a game with low stakes. As for the stakes, the minimal one is only € 0.10, and the maximal one gets the heights of € 100 for a spin.

The maximal multiplier in The Rise of AI Slot is more than 1,000x for a spin. Also, a no small plus is a Return To Player Percent of all stakes made. As we have learned from the legal guidelines for the game, the return of total bet sum is RTP 96%, which is an excellent figure in the games of this genre.

During the game, every player can consider an active menu of the slot machine, which is denoted by i-symbol. The menu tends to change its values of payouts for the landed symbols according to the stake you have chosen. Also, in the corresponding menu item, you can read more about the rules of the game, as well as the slot’s functions and characteristics. So, the first thing to study is the guidelines for the video slot, and after that, you can proceed to money bets.

The Rise of AI is one of few video slots having no bonus game, that, at first glance, seems to be a big disadvantage. However, that’s not quite true. The slot machine is mostly intended for an expensive game with the only idea to take as many good wins as possible. Lack of bonus game is balanced with excellent functions, which seem to us much more attractive than waiting for empty free spins.

In The Rise of AI Online Slot, there is a total of seven paying symbols, and this quantity loses a lot compared to the similar games. There are three high-paying symbols, such as:

The expensive symbols are followed by low-paying symbols for which a player can be awarded from 0.5x up to 20x for a complete line of five similar symbols. Certainly, it really seems a significant sum, especially in combo with multiplier functions.

In The Rise of AI slot machine, you can trigger two functions:

The Rise of AI is sure to be a favorite for the fans of the Cyberpunk theme, as well as the players looking for frequent and good wins. Among the pluses, we can safely note the creatively different design, background sounds, and cool functions of random multipliers in a base game. Moreover, we would like to say about good adaptation to mobile devices that will allow you to play in the best mobile casinos on your smartphone. The Casinoid.in team recommends all its players to plunge into the Cyber World and help the Universe to enter a new prosperity level.