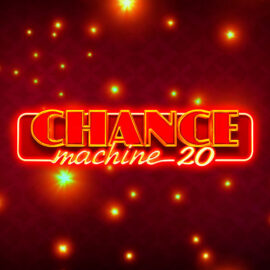 Endorphina, the renowned B2B iGaming software providing firm, is all set to surprise its fans with another amazing product – the Chance Machine 20 slot.

The Chance Machine 20 slot is one of the classic game solutions released by the Endorphina Company in 2020. The slot machine is designed in the style of the early 2000s that hints at very simple design, lack of soundtrack, and poor animation. On second thought, the time we have spent in the Chance Machine 20 game has shown, that graphics and sound are not exactly of need when the king’s crown symbols land on three central reels. More information you can find out in the review.

The Chance Machine 20 video slot would be best for those who play in a high-roll mode since it has a high volatility status. No doubt, it will provide the largest possible win in the game with high stakes. As for the stakes, the minimal available stake is € 0.20, while the maximal stake amount can be as high as € 200 for a spin. Also, we’d pay attention to the biggest win in Chance Machine 20 as its amount can exceed 3,000x stake for a spin. Important! The stakes return in the Chance Machine 20 slot machine is RTP 96%, which is the most common value for the games by Endorphina’s developers.

During the game, you have a chance to open the slot’s active menu. With that, it will change its payout values for the symbols according to the stake you’ve chosen. The function will let you clearly understand both the game and the win you can rely on with either stake. Furthermore, in a particular slot menu, you will be able to study in detail all the rules and conditions for getting winning combinations, and also take into account the pitfalls of the video slot.

Sad enough, there is no bonus game in the Chance Machine slot. To compensate it, there are good payouts for the combinations of high symbols and equally excellent functions with a big multiplier of a win.

In general, the Chance Machine 20 video slot provides ten symbols, and five of them are high-paying ones, such as:

Next, the low-paying symbols come, and the payout for the landed ones is between 0.5x and 10x for a complete line of five symbols.

The total of functions in the Chance Machine 20 is two, the first and the coolest one is a random wild activated randomly on the second, third, and fourth reel, a trigger for the activation is a landing of up to three golden crowns, which will completely replace one or more reels with a wild symbol for an excellent combination. The second function is a risk-game, it is standard for all slot machines by the Endorphina Company. The point is that a player can manifold multiply every win combination by playing an extra game, and the winning will be brought by a correctly chosen card.

The Chance Machine 20 video slot will one-hundred-percent please the players who got used to stake in the high-roll mode. It will let them take a really big win, that is, over € 600,000! As for the graphics, sound, and animation, well, they won’t be of a great surprise for you, but, frankly speaking, it won’t interfere with a good game. We should mention, among the pluses, excellent adaptability to mobile devices. No doubt, it will allow you to enjoy the game even on a romantic date somewhere at an exotic restaurant. The Casinoid.in team recommends playing on this slot machine only in the best casinos, that we have carefully selected for you!