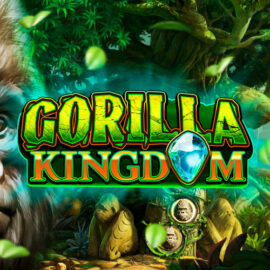 With engaging mechanics aiming for simplicity, and stunning and engaging art and sound design, Gorilla Kingdom™ appeals to a broader market range and offers enough variance for the player.

The Gorilla Kingdom is a unique slot machine of its kind. It is packed with awesome functions and a large number of winning lines as well as five playing reels. Of course, we can’t help mentioning a pretty design that will bring you to the world of uncontrolled jungle. Here, you will be surrounded by wild animals, who will help you to rush through the impassable jungle. Not the least of the factors that make the game excellent is the natural sounds creating the environment. Undoubtedly, the developers have delivered much on its implementation and embodied in it some feeling of anxiety and agitation. You can get more details about the Gorilla Kingdom slot machine in the review below

The Gorilla Kingdom slot machine is an excellent choice for the players who never hurry and prefer to hope to a roll of the dice, so to say. The point is, that this video slot machine is of Medium volatility status, and that would mean that the winning situation occurs much more often, but at the same time, the winning amount differs markedly from the permitted maximum. As for the maximal win in the Gorilla Kingdom video slot, it is more than 4,000x of the bet made. Yes, you can’t say that the maximal winning sum is very big, but I guess that that the multiplier close to this value will land far more often than on other similar online games. Naturally, on top of that, an amount of possible bets is of note, where a minimal one is only € 0.10, and a maximal allowed reaches the highest point of € 350, that also will be great for high-rollers. Important! The rate of bet return on the site is not bad, but it is far from being high. The developers announced that it is RTP 96.03%. More than likely, in a bright future, the figure will a little change for the better, as, at the moment, the slot is a new thing, and only a few players have tested it.

When playing in an online casino, namely, the Gorilla Kingdom video slot, every player can open an active menu that will change by default its values of payouts for symbols depending on the bet chosen. Also, you can study in detail all functions and terms of getting a bonus game here.

To activate a bonus game, you must collect a combination of three, four, or five Scatter symbols and, after the start-up, you will get from ten to twenty free spins. Your task is to trigger as many as possible animals’ functions, and you will add two free spins to the symbols you have at the moment. The functions’ activation is as follows: while spinning, the reels will provide the symbols that will complete one type of animal. Every complete symbol will replace a base symbol for a high-paying one, thus enabling to win much more. In total, there are four symbols that you must complete, so complete all of them to get a big win!

The full number of symbols to land on the Gorilla Kingdom slot machine is ten, and for five of them, a player will get a much bigger payout than for others, namely:

After them, the low-paying symbols follow, for which a player can get from 0.2x up to 1.5x for a complete line of one of the landed symbols. As for active functions, unfortunately, there are no of them in a base game and, of course, it doesn’t seem a big disadvantage. And if you look on the bright side, they are of no need here, as the game is really created for a quiet pastime with hope for a good win.

The Gorilla Kingdom video slot is one of the calmest game solutions by the NetEnt line. To date, it is one of the new slots released by the developer in 2020. Pretty graphics, quality and charming sound that will carry you right to the jungle full of beautiful flora and fauna. It is worth recalling that the adaptability to mobile devices looks its best both in theory and in real practice. The Casinoid.in team recommends its players to try the Gorilla Kingdom video slot for free. And if you decide to play for real money, do it wisely and only in the tested casinos! Good luck!