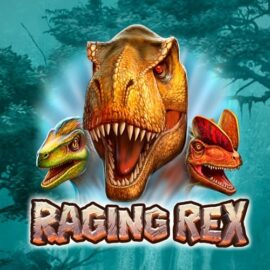 Play‘n Go starts the 2019 with a bang. This time around, they welcome you to the world of dinosaurs, officially thousands to millions of years ago, but Raging Rex brings that theme back to life.

Raging Rex slot designed in prehistoric times and lets you win big in the dense jungle between dinosaurs and meteors. The slot machine was developed by the manufacturer Play’n Go. In this review you will find all the important information, tips and tricks about Raging Rex.

The Raging Rex online slot has six reels and four rows. You win if you land at least three identical symbols as a winning combination from left to right. So there are 4096 different ways to win in Raging Rex. You can play with a minimum of € 0.10 per spin and a maximum of € 100 per spin. Of course, Raging Rex also has an auto play feature. The payout expectation of the slot is 96.34%. A comparison with other slot machine games will show you that it is a good value.

In terms of graphics, Raging Rex leaves nothing to be desired. The waterfall in the background is extremely realistic and the other animations (the pterosaur in the background and the winking T-Rex) let you experience the dinosaur feeling up close. It’s also great that not only relaxed background music was chosen, but jungle noises were also included.

The features of the Raging Rex slot

In addition to the fossil symbols (spiders, scorpion, beetle and mosquito), Raging Rex also has four different dinosaurs (Velociraptor, Dilophosaurus, Triceratops and Parasaurolophus). In case you’re wondering where the eponymous T-Rex has gone: The T-Rex symbol is the wild and replaces all other symbols except for the scatter. The meteor symbol is the scatter and important for the bonus features.

Much more exciting, however, is the Raging Spins Bonus Feature. You activate it by earning three, four, five or six meteors and then win eight, 15, 20 or 30 free spins (and five times your stake). If you win two or more additional Meteor symbols during the Raging Spins Bonus Feature, this means additional Free Spins. You can collect unlimited free spins.

The Freespins feature is improved by an additional feature: You can choose between the Wild Hunt Feature and the Primal Rage Feature. In the Primal Rage feature, a Raging Rex Wild reel appears on every spin. If, on the other hand, you choose the Wild Hunt feature, you can earn T-Rex Wild symbols which are also equipped with an extra multiplier (two or three times) to multiply your winnings.

The slot with the dinosaurs develops a great momentum of its own, especially with the bonus functions and free spins. The developers have created a really entertaining slot game with impressive spatial sound effects. Winnings up to 5000 times and 4096 winning options increase the fun of the game. If you would like to take a trip into the past, we warmly recommend you to play the Play’n GO slot Raging Rex for free with us.