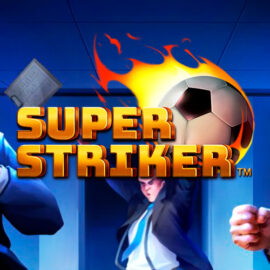 What a hit! Kick off the summer with Super Striker™, the new 3-reel, 3-row video slot from NetEnt™, featuring multi-level Free Spins, the Golden Multiplier feature and the Bet Slip feature.

Super Striker is a video slot released in 2020 by the NetEnt Company. The game is played on the football pitch, right during the superb match. High-quality animation and wonderful sound will bring you directly to the supporters’ stand, where the noise never ceases.

The Super Striker slot machine has three reels on board, as well as three paying symbols. Also, we should mention the slot’s major feature – a large number of multipliers that you can get during the game. Find out the details in this review.

The Super Striker Slot, as the developer affirms, is Mid/High volatile. In simple words, if you like winning often but not always much, the slot of this type is created right for you. Also, it will be a favorite for the players hunting big wins and multipliers. A maximal possible multiplier on the slot machine reaches the heights of 5,000x of your bet. As for the bet amounts, the minimal permitted one is only € 0.10, and the maximal possible bet doesn’t exceed € 75. Well, a certain number of people will be a bit dissatisfied with this small minimal bet, but a thing that is sure to hook them is a convenient game and an excellent return. The official sources say that the Super Striker slot’s return is RTP 96.04%.

During the game, every player can open an active menu of the slot machine and watch how the amount of payment for the symbols changes depending on the bet chosen. Also, in a corresponding tab, you can study the details of the entire set of slot’s functions no matter they are payouts or a bonus game functions.

To start up a bonus game, you must collect a combination of three Scatter symbols. After the bonus game activation, you will be awarded three free spins. Your task is to collect as many balls as possible thus increasing the amount of multipliers. For every ball, a certain multiplier is randomly provided, as well as three spins. By filling the playing area, a player gets the multiplier function, and a new game starts. In total, you may fulfill the playing area no more than five times, for every level, a player will get a multiply from 1x up to 10x of the total win in a bonus game.

In general, the Super Striker slot machine can provide no more than seven active symbols, and four of them are high-paying ones, namely:

Then, the low-paying symbols follow, for which you will get from x1 to x3 for a line of three symbols or a complete combination. That’s not to say all symbols are very different from each other, especially in the  presence of an excellent function.

At random, a golden ball may appear on the reel – a Scatter symbol, together with casual Scatters, they trigger a bonus game, and a golden ball activates an additional multiplier of a total win.

The Super Striker slot machine is one of the newest slots by the NetEnt Company. Atmospheric background music, big multipliers, nice graphics, and awesome functions are the things missed for a long time for calm and deliberate playing in an online casino. Important! The slot is adapted to mobile devices, so the football fans have got the opportunity to play right in their pockets any time and at any place. Do you want to appear in the game and give the dummy to the coolest golden footballer? Then, you need to go right here! The Casinoid.in team recommends its players this online slot and wishes them luck in the form of winning goals!