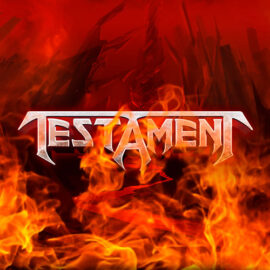 Testament is a video slot from Play’n GO with 5 reels and 243 ways to win. This game was released in March 2020.

Testament slot has the potential to break this pattern. The fifth slot in their Metal series, Testament follows in the footsteps of Demon, House of Doom, Black Mamba and Sabaton. Maybe you have never heard of this band before, and if so, don’t worry. This is a Californian trash metal band that has been making albums since the 1980s. So you’ve been around for a while and clearly have a loyal fan base.

Their music is loud and their images are gloomy. Both are strongly represented in this slot. Regardless of the actual origin of this slot, one could easily pretend it was a dark fantasy slot and like it no less. The scene finds us in the great hall of a gloomy castle. The slot is visually impressive, but we don’t expect anything less from Play’n GO.

Testament is a trash metal band from the United States. Originated in Berkeley, California, it released some of its biggest hits (for a small targeted community) in 1980’s. The band plays still toady, and its lineup comprises of four musicians. While some may find trash metal annoying, or even disturbing, the band did a lot for the evolution of the genre and for its fans. Over 1.4 million of its albums were sold across the country back in the day.

The release is stylized in the trash metal way, with such traditional symbols of the genre as swords, shields, hard man on a throne, werewolves, vampires, horned skulls and other items landing on the reels. Apocalyptic metal music and animation complement the action.

As you rock to the rhythm of the game, you can trigger some record breaking wins with the special bonus features. This includes triggering song bonus features which come with different rewards.

You trigger the feature by landing 2 scatter symbols on the reels in a single spin. You then get 3 free spins where one of the features will be activated.

In this feature, any wilds that lands on the reels stick around and remain fixed in position until the free spins are over. This has the potential of getting you a handsome payout.

The Skull wilds spread up or down on the reels when they land.

The feature is triggered when you land 3 to 5 scatter symbols on the reels in a spin. Getting 4 or 5 scatters in the same spin also gets you winnings of 5 or 20 times your stake. The feature rewards you with 9 free spins and the reels also expand to 4x5x6x5x4 and you get 2400 pay ways on every free spin.

The 9 positions at the top are also blocked by stone blockers and landing more scatters crushes the blockers to expand the reels further. Crushing all the 9 blocked places grants you a new feature, Testament Spins Feature, where you get free spins.

There are five reels, three rows and 243 ways to win to this grid, with a chance to expand to a 2,400 win lines in a special feature. Cost of the spin starts at 0.10 cents for the low rollers and reaches up to 100 credits per a rotation if you are a high roller going after major wins.

The Testament online slot is an excellent job by Play’n GO in bringing everything about the band and their music to life. The look is amazing with extremely detailed symbols and a dark throne room background with fog floating in to create a really spooky atmosphere.

On top of that, the gameplay is a lot of fun with a format that’s conducive to a whole lot of action to begin with. Along with that, you get the feature set that includes multiple styles of free spins and extra features that bring in even more value than what you’d already get from the regular game mode. You can find this slot at the Best online Casinos listed on our website.