Travel to Mexico for a hot reel fiesta on the slot from NetEnt. Willy’s Hot Chillies is after Spinata Grande the second creation bearing a Mexican theme, only that this time it will be for a friendly senor to set off the reel celebrations instead of colourful pinatas. The game comes with stacked multiplier wilds and Willy’s Hot Wheel bonus feature that can lead to wins of up to 2,000 times your bet.

Willy’s Hot Chillies is the newest slot of the Netent Company released in 2020. The gambling slot is designed in a Mexican style, has excellent background music, numerous bonuses, and useful functions. It is necessary to mention the bold design solution of the slot. The players loyal to this developer’s games were surprised to see something new and dissimilar to other games. At first sight, the Willy’s Hot Chillies video slot is worthy of every gambling fan’s attention. Whether it is true or not, we will find out in this review.

The Willy Hot Chillies video slot is one of the slots where you really can play with fun. Numerous functions won’t make you bore. This gambling slot has a low volatility status, which means that the players who enjoy frequent though not big wins will no doubt like this machine. A minimal stake on the video slot is € 0.20, and a maximal one reaches € 400 within one spin. Don’t be afraid of the minimal stake amount because, according to the developers, the Willy’s Hot Chillies has RTP 96%, which is much more than in the other soft suppliers’ games. As for the maximal win on this slot machine, it is a very controversial situation. According to official sources, the maximal permitted win through this gambling slot is slightly more than 2,000х of your stake amount, but if you study the slot in detail, you can notice that the maximal multiply can be dozens of times that amount.

When playing the Willy’s Hot Chillies games, you also can open the section containing the slot functions, and a payout for the symbols will change its values according to your stake amount. Plus, in the corresponding sections, you can learn the details about the slot machine, and the behavior of bonus symbols and functions will give you a clear understanding of the game.

The game has two symbols responsible for the bonus game activation, to launch them, you must land the Bonus symbol on the first reel as well as the Multiplayer symbols on the other four reels. Keep in mind that the Multiplayer symbols must cover at least one entire reel. After that, a bonus with 5 and more free spins activates. The bonus game runs like a fortune wheel, where for every spin, you get a payout, or an empty spin may appear. Also, it worth noting that for every successful spin, your winning multiplier will be 2х and more. At random or at the symbol landing, your win multiplier may increase alongside with increasing your stakes. Remember the extra free spins, where, for landing, you will get 3 spins in addition to those you have at the moment.

In the Willy’s Hot Chillies video slot, there are eight symbols available, four of them are high paying. The first and the most expensive is a chest of gold for which you get 1х for three similar symbols, 2х for four, and 3х for five ones or an entirely covered line on your stake amount. As for other symbols, a payout is from 0.5х to 2х for a landing. The situation with the low paying symbols looks much disappointing, as at the landing, a payout is no more 0.5х of your stake amount.

Don’t be afraid of such low payment for the symbols, since the Willy’s Hot Chillies gambling slot has a Multiplayer function. While spinning, the multiplayer symbols may appear on the reel randomly, these symbols will help you to gather a better winning combination by multiplying your bet 2х, 3х, 4х, 5х, and more or even cover the entire game board. 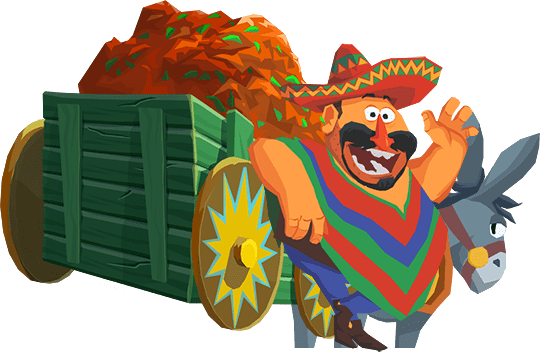 Willy’s Hot Chillies is no doubt deserves the attention of every fan of modern and well-thought-out games. New functions, bold design, and quality soundtrack can easily make you immersed in the rhythms of spicy and, at the same time, hot Mexico. Also, a big pro of the Willy’s Hot Chillies slot machine is the fact that it is perfectly adapted to mobile online casinos. In 2020, the NetEnt Company never ceases to make happy its players by providing them all new and quality products. Casinoid.in recommends trying the video slot free of charge.