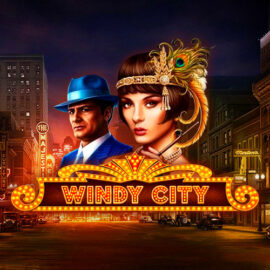 The mafia of the 1930s, and the whole prohibition era style action, along with the Art Deco movement of the time, have resulted in several other excellent slot machines over the years, and we’re seeing one more in Windy City.

The Windy City Video Slot is a game made in the style of Chicago in the 30s. From the first minutes in the slot, you will immediately appreciate well-developed graphics, quality animation, sounds produced by a bar piano, and a purely nice plot. All of these things certainly create the atmosphere of stormy times, when Chicago streets were heated up with easy money and gangsters who were hunting for them.

A big plus is that the Windy City slot machine has its unique functions. They make the game extraordinary thrilling. And, of course, we cannot but noting the video slot standard set that includes five game reels and ten pay lines. You will learn more from the review.

The Windy City slot machine, as the developers announce, is medium/high volatile which makes it perfect both for the game with low bets and playing in the High-roll mode. It is to regret for all players who prefer expensive stakes, the Windy City slot has a fixed maximal rate equal to € 100 for a spin. Also, note, that casual casino fans are lucky indeed because the minimal stake is only € 0.10, that, we think, everyone can afford.

As for the wins, a maximal stake in the Windy City slot machine can exceed 5,000x for a game series. It sounds really, really great. And as for the return percent (RTP), the Endorphina Company has screwed up to some extent by stuffing into the online machine a standard value of the return. As a result, it is 96%, and it is one percent lower than other suppliers of similar games offer.

If you play the games by the Endorphina developer, you have the opportunity to open the active menu in the online machine denoted by i-symbol. When opening it, you can watch the changes in payout characteristics for the symbols according to the stake you have chosen. The active menu is designed for a player’s comfort, namely for the correct definition of a matching stake. Also, by scrolling down, you can study in detail all functions, activation of free spins, and rules of the game.

To activate a bonus game, you must get three Scatter symbols on three game reels, after that, the game with ten free spins activates. During the free game, the Scatter symbol transforms into the Wild symbol, thus significantly increasing your chances to get a good win when landed. Also, in this mode, another Wild symbol becomes active, which is displayed as Gangster Wearing a White Suit. The idea of the active functions in the bonus game is to improve or gather as many winning combinations as possible.

In total, the Windy City slot has nine symbols, and some of them are very expensive, which is a big plus even when you play in a basic mode. Let’s get into details:

The expensive symbols are followed by low-paying ones, for which a player can get not that much, but it’s far from little, namely, from 0.5x up to 15x for a line of five similar symbols.

As for the functions in the basic game, there are two of them, the first is Wild, that replaces the landed symbols and gathers the best combination or even constructs an own line, thus bringing more than 500x for a spin. The second function is Risk-game, it is standard in all games released by the Endorphina Company. The idea of the function is that a player can manifold increase the winning combination if he previously has played a card game, where the right cards should be guessed.

The Windy City Slot Machine will carry you to the gangster environment with guns and a large amount of alcohol, which sounds pretty good from the casinos’ point of view. Of course, here, a cute animation is a great advantage, as well as big multipliers. Also, adaptation to mobile devices is worth noting, which allows playing Windy City directly from your smartphone non-location-dependent. The Casinoid.in team recommends trying this slot machine for free. And, if you get interested in it, you will be able to find it and play for real money in the best online casinos we have chosen for your special benefit!